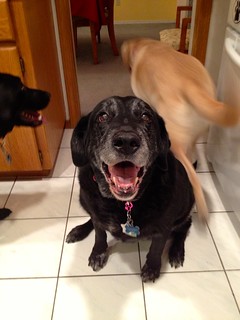 That was what we called the last summer we would get to spend with our beautiful Lucy. She was dying of cancer. I was afraid that adopting another dog and adding stress to her life would kill her. This dog needed help though. I checked with my rescue friends. I emailed a couple of groups. No one had anything available in the area to help her out and after talking to the poster, I knew that her situation was pretty bleak. They’d lost their house. She was staying with family when they discovered she was not living the life that she deserved. Their landlord gave them three weeks to find placement for her. The Craigslist post was a last ditch effort to let her final years on this earth be good ones. They wanted her to be loved.

Love isn’t something I’m short on. I’m a sucker for an old dog. I never thought I would find myself adopting a senior, but Lucy changed my mind about that from the moment that I saw her face. So, when the poster sent me Jazzmin’s photo and there she was, all beautiful and gray, laying in the floor next to a little girl who had her arms thrown around her neck, I knew.

It took her owner a while to know what I knew, though. I waited for a couple of weeks with no word and then I got an email. We met up in a parking lot and introduced Lucy to Jazzmin. She was so reserved that I wasn’t sure how well it went, but I had a good feeling about it and so, Jazzmin got in the car with us. I hugged her previous owner as he struggled not to cry and promised that I would take good care of her. 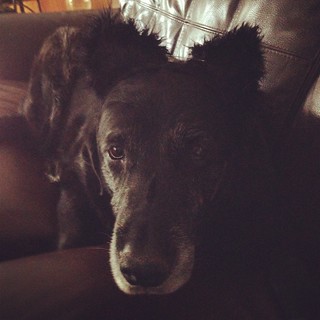 From day one, she was absolutely perfect. So soft and so quiet in the house, but not without sass. If you got her outside in the backyard, she would not stop fetching. She was a retrieving machine. The second she saw water, she would whine and fuss. To Jazzmin, water meant fun. If you got her retrieving in the water, you gave her the best gift in the universe! She wouldn’t stop until you hid the toy in a bag and picked her up and carried her back to the trail. I thought it was energy at first, but in the house, she was laid back and preferred to snuggle. Sometimes she would want to tug or play with toys, but mostly, it was about the cuddles. That’s when I knew that it wasn’t really energy. It was just that retrieving a bumper and bringing it back to her person, only to go do it all over again was her idea of a good time.

She loved walks too, but she wasn’t very good at walking on lead. She preferred to go off leash. She was the only dog I have ever allowed outside of my front door off lead, on purpose. I doubt that I will ever do so again. She would go find a stick for you to throw for her if you told her to. She knew all of her basic commands. She was incredible. She showed me exactly how good a Labrador could be and after years of owning troublemakers and terrorizers and rescuing dogs that had so much baggage, she was like a breath of fresh air.

She spent all of the nearly 14 years she had on this earth, being loved.

Every dog deserves that. 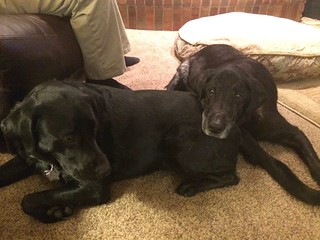 A month after Jazzmin came home, Lucy died after only spending a scant 21 months with us. A month after that, Jet came into our lives. Six months later, Mugen was gone. Jazz set about the business of setting Jet straight and I was so horribly lonely without my brown dog, that I adopted Lexi before I was really ready, but that ended up working out too. Jazzmin accepted them all and loved them all and they loved her right back.

In October of 2012, just a few months after we celebrated her first “gotcha” day, we were told that Jazzmin had lymphoma and that we had six months remaining with her, at best. I started crying the moment I got off the phone with the vet. I told my husband I couldn’t handle it, losing another dog to cancer so soon. Then something amazing happened.

We celebrated her 13th birthday, which we never believed she would see.

We had one more Christmas with her, which we never thought we would get. 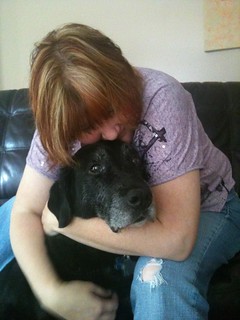 And then, finally, on Sunday, at the age of 13 years and 10 months, Jazzmin got me up in the middle of the night and I knew. She was ready to go.

I waited one more day, to be able to let her go to the bridge at our regular vet’s office and I made it count. We had lots of cheese. She got to lick every single plate that was used in the house. We went for a walk. She got to watch the kids next door play on the sidewalk and surprisingly, amazingly, after having refused to play fetch for a long, long while, we played a short distance game of fetch together in the family room. When the time came to let her go, I knew it was right.

There will never be another Jazzmin for me. My family and I have been so blessed to have been able to share the last three years with her.

I want the whole world to know that I love you, always.