I apologize to my readers for my long absence from this blog. This post is overdue.

I have been hard at work on finishing my first novel and preparing it for publication and I’m still not done. I published a short story in an anthology under my pseudonym, Jolie Byrne. You can buy it here:

The proceeds from this anthology go to benefit a wonderful group of folks on the internet known as The Dragon’s Rocketship. They provide a safe space for people who are just a little bit weird. The know-it-alls. The smart-alecks. The nerds and the geeks and the sci-fi and fantasy enthusiasts. You know, people like me.

I’m also working on publishing another short story with an anthology that has more of a horror vibe to it, which is totally up my alley. That should be coming out this spring.

I attended WorldCon this summer too, which was a total blast. I met Connie Willis. I got my picture taken with her! Connie Willis! OMG! I totally fangirled over her. I had a very long conversation with Kevin J. Anderson about the first book in his new series, The Dark Between the Stars. I talked to David Gerrold and Vonda McIntyre and attended a reading from an unpublished work by John Scalzi. I participated in the world’s largest group reading of “Where’s My Cow” by Terry Pratchett, may he rest in peace. Got my copy of A Dance with Dragons signed by George R.R. Martin (thank you to my wonderful husband for standing in line for that for me so I could be the matron of honor at my friend’s wedding.) I loved every single minute of WorldCon. I absolutely want to go again.

All of that is a pretty big deal, but something else happened to me too and it was an even bigger deal.

In July, we brought home this little angel and we named her Zoe. 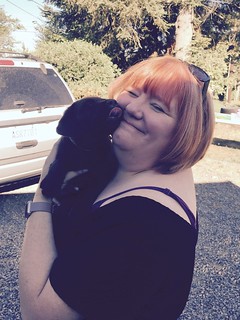 When this little bundle of chocolate Labrador puppy wonder was first put into my arms, I spun around and I said, “Hello!” and she kissed me. That was it. That was the moment that she entered my heart and would stay there forever. My husband caught it on camera. It is one of my favorite photos of me and I’m not too big on letting people take my picture, so there you go.

The past four months have been incredible and that word is not big enough to really define what I feel. This little brown dog, man she is everything that was advertised. She is a dog I can live with. She has a solid off switch inside. Outside, I love seeing this girl run. She gives Jet a challenge and anyone who has seen Jet haul ass when I call him to front knows what I mean. She is FAST. Her recall is almost as good as Jet’s, even when there’s a flock of turkeys walking past her when I have her on a long line, if I call her, she comes running.

Of course, Zoe was the only Labrador in her first puppy class. The pit bull puppy was more laid back than she was in the classroom. The rottie puppy was so mellow that they all made Zoe look like an out of control, poorly behaved dog, but the thing was, she wasn’t. She just had more energy than they did. She had more bounce and sparkle. The trainers told me several times, “She is going to be such an incredible dog. You’re not going to recognize her in a year.” 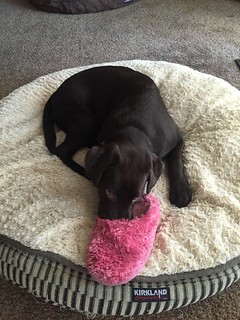 They see what I see. They know what I know about this little girl. She is already an amazing dog. There are times when she’s the most well-behaved of my three dogs and that’s saying a lot for a puppy her age.

This is more like what I expected when she came home! I love how mellow and easy going she is in the house, but when we are training, she is ready to go!

The puppy books say that she is now at 60% of her maximum growth. This tells me that she’s going to be a small dog. Her max weight will be right around 60 pounds if she follows the rules of averages. She’s a petite little gal. Good things come in small packages though and Zoe is definitely a good thing. She makes us laugh every day, just by being her sweet, wonderful self.

As she heads into the teenage stage, where she is pushing boundaries and freaking me out by performing feats of impossible agility, I am reminded very much of Mugen. Mugen’s Dad was Zoe’s great-grandfather. So there is some resemblance and I do love finding those little things, like the spot on her tail where the undercoat hairs are white or the shape of one of her paw pads that is just a little bit different than the other. 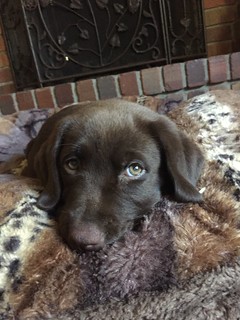 I miss Mugen like crazy, but that wound that was left when he died is healing. Every now and then, I look at Zoe and just for a second she looks like him. Until now, I have been just okay. I have been living and I have been making it. It’s like I’m taking something that was broken, put back together badly, and now I have the tools and materials to put it back together the right way.

You never know when you need a hero, but when you do, they show up in the most unexpected places. I thought I was getting a puppy.

I got a big damn hero instead.